What Is Kundan Jewelry 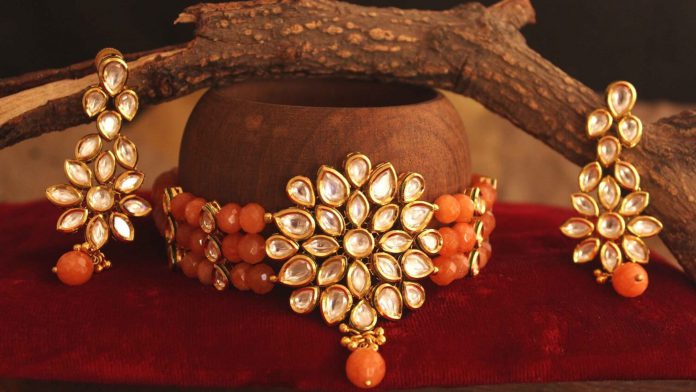 Kundan jewelry is one of the oldest forms of jewelry making technique in India.

Contrary to popular perception, Kundan jewelry isn’t really characterized by its stones and gems. Rather, Kundan refers to extremely refined gold that is rarely solid.

It is believed that Kundan jewelry first originated in India in Delhi during the Mughal period. Back then, the royal class used to adorn intricate pieces of Kundan jewelry. However, at a later stage, artisans moved to Rajasthan.

Over a period of time, a whole cluster of Kundan artisans settled in Rajasthan. That’s when Rajasthan got the reputation of making the finest Kundan jewelry in India. Today, the cities of Bikaner and Nathdwara are well known for their Kundan jewelry.

How is Kundan jewelry made?

Making of Kundan jewelry follows a very intricate process. It is a long process with each stage handled by a separate, skilled worker.

It starts with beating of gold in a very thin sheet. This acts as the base for the jewelry. This sheet is then filled with lac, or laakh. Lac is a byproduct of tree sap and known to be a natural resin. It is in this lac that the stones or gems are set with a help of hot coal.

In order to give the stones a strong grip on the metal, 24 carat melted gold is poured into the sides. This 24 carat gold is what is known as Kundan, and hence the name. Kundan is poured, or rather inserted in the holes with the help of a very small stick.

At the end of the whole process, the jewelry piece if then cleaned and washed to remove dark spots due to welding.

With the price of gold touching the roof, not many people can afford to buy traditional Kundan jewelry. That’s what led to the rise of imitation Kundan jewelry.

Imitation Kundan jewelry is nothing but copied Kundan designs, sans the expensive 24 carat gold. Thus, you get the same intricate design and beautiful ornaments without the exorbitant price of gold.

There are people out there who will try to sell you imitation Kundan jewelry for the price of a real, traditional piece. It takes a trained eye to differentiate fake from real. However, if you are going for Kundan jewelry shopping, here are a few tips that might help you save yourself from getting robbed: