Sarees and Bollywood an Age Old Connection That Inspires The World 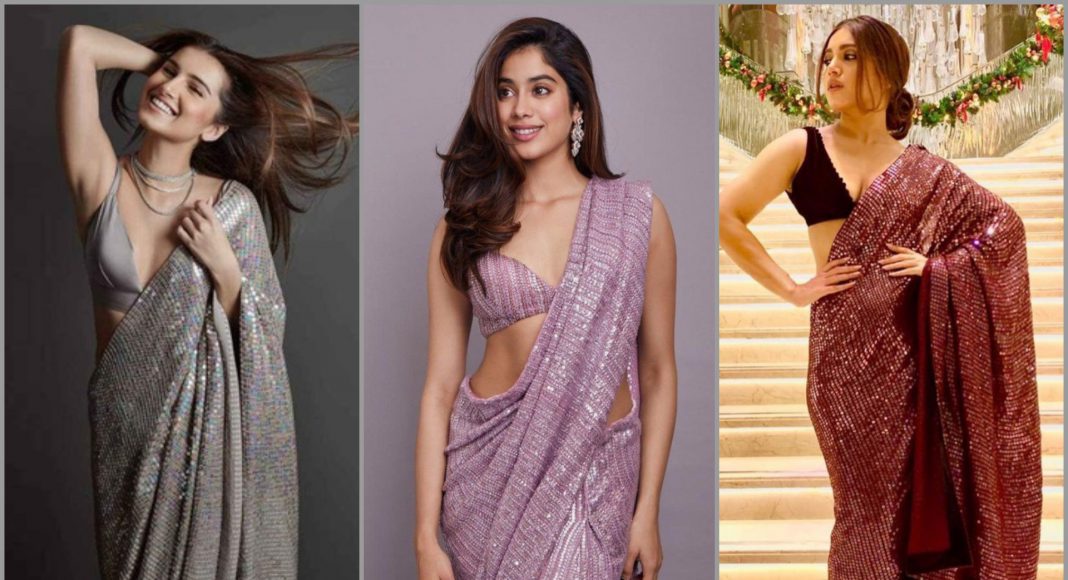 Bollywood has a strong connection with sarees for decades back. Sarees and Bollywood go hand in hand and inspire trends in India. Sometimes they become famous after a film or a particular style followed by heroin and sometimes even songs are enough to start a new trend of sarees for the festive season. From the retro to 2015, sarees and Bollywood have walked together for a long time and still have a long way to go.

Sparks flew when Mumtaz donned the orange and gold border saree in the song ‘Aaj kal tere mere pyar ke charche’ and showed off her moves in the stunning, sexy saree and the special style of draping the saree without pleats. The iconic look has since then been copied hundreds of times and lapped up by the entire nation. Then in the late 80s and 90s came Madhuri Dixit and rocked the silver screen with the heavily adorned purple saree in Hum Aapke Hai Kaun. Her stunning look in the song ‘ Didi Tera Dewar Diwana’ made her a sensation in Bollywood and the saree sold like hot cakes in the market. It may not be as attractive to women right now in 2015 but the saree was a dream one for women back then and the talk of the nation too.

Time and again the leading ladies of Bollywood have carried the saree gracefully and with oomph and made the entire population follow them. Right from Waheeda Rehman to Sridevi and Deepika Padukone, sarees have an inseparable connection with Indian films. Who can forget Sridevi in the blue saree dancing with Anil Kapoor in Mr.India?  Saree scenes have often become memorable parts of films and people have cherished them and talked about them everywhere. The way Kajol proved the image of the modern Indian woman in Kuch Kuch Hota Hai by tucking the saree at the waist and playing basketball was a wonderful move. She carried the saree with attitude and such solid colored sarees like the red saree worn in the song ‘Tum Paas Aye’ got very popular. Kajol once again popularized the trend of designer chiffon sarees with the release of Kabhi Khushi Kabhi Gham.

Cut to 2008 when ‘Singh is King’ released and Katrina Kaif’s black and red sheer net saree made her look jaw-dropping gorgeous in every frame of the song ‘Teri Ore’. Since then lots have been written about it and the saree was sold in large numbers and still continues to be one of the most bought Bollywood sarees. In the same year, ‘Dostana’ too released and Priyanka Chopra looked ravishingly hot in the beige gold shade saree worn with a bikini blouse in song “Desi girl”. The song was an instant hit and Priyanka created a sensation with her looks. The saree has since then inspired many Bollywood sarees. Recently, Deepika has taken the nation by a storm with the black and pink saree and the electrifying royal blue saree with a copper-gold border worn by her in ‘Yeh Jawani Hai Deewani’. She danced off with oomph and the sarees became fashion statements overnight. She also inspired the graceful half saree look and the elegant Kerala cottons in her South Indian village belle look in the 2013 blockbuster Chennai Express.

Sarees are and will continue to be fashion statements in India as people here just cannot do without Bollywood and filmy fashion and entertainment.