Woven Threads of Tradition – The Embroidery Styles of India

This large subcontinent of India is home to people of different communities, religions and cultural backgrounds. Often referred to as a ‘melting pot’ India has assimilated the best from the various traditions of the people who have called it ‘home’. When it comes to the fine art of embroidery too, the many splendored country has a variety of beautiful styles to choose from, each drawing from the heritage of people who are based in that region. From the valley of Kashmir, ‘paradise on earth’ comes the unique embroidery of Kashidakari. Steeped in the history of its people and tracing its roots to Persia, this ancient craft is practiced by the women in their homes through the harsh winters when farming was not possible. The basic stitch is a variation of the chain stitch and by changing the length of the stitch the design element is created. Typically they use threads which have subtle shade variants. Motifs draw heavily from the flora of the state. Traditionally it was done on silk or wool but today’s commercial dictates mean that it is executed on all fabrics. From the snow-capped mountains of Kashmir to the lush green fields of Punjab. The name Phulkari means a head scarf or a dupatta with which women cover their heads in this state and is usually heavily embroidery with floral patterns. The unique feature of phulkari is that it is usually done on a hand spun, essentially dull cloth with colourful threads that cover every inch of the fabric. An interesting fact about Phulkari is that it is done on the wrong side of the cloth using a darning needle. When one thinks of mirror work on garments, immediately there comes the image of tribal women from the deserts of Rajasthan. Indeed, the Rabari women of the state are famous for embellishing their clothes with mirrors which they believe wards off the evil eye. Today, this form of embroidery, which also traces its roots to Persia, can be found mainly in the states of Gujarat and Rajasthan. Various types of stiches like cross stitch, buttonhole stitch and satin stitch are used to keep the mirrors in place. When it comes to the aura of royalty, none can rival the ‘Nawabs’ of Lucknow. Theirs is a completely different culture that is centered around ‘tehzeeb’ and ‘nazaqat’. The embroidery of the Mughal royal dynasty, Chikankari, is practiced here. Employing the classiness of ‘shadow work’ chikankari is usually done on fine fabric where the delicacy of the work can be appreciated. While traditionally it was done ‘white on white’ today the colour palette has expanded to cover every hue. 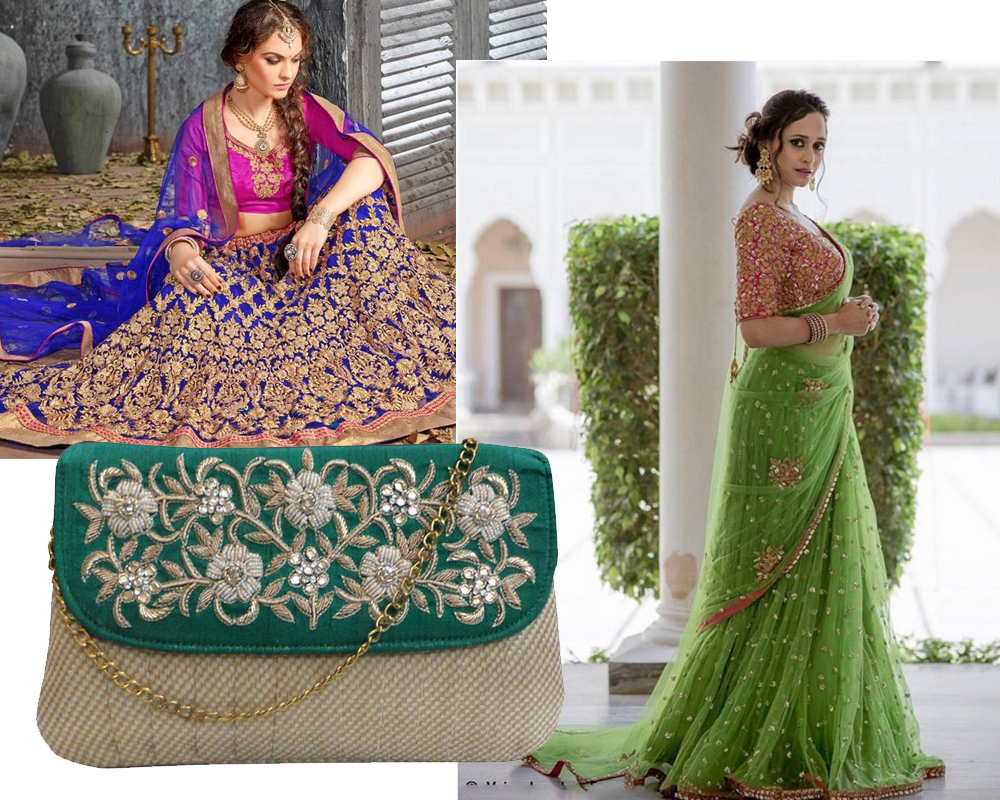 Probably one of the most popular and well known forms of Indian embroidery is Zardozi. The word finds its roots in the ‘zari’ or gold threads used to create the intricate patterns. Though of course, today, keeping the cost factor in mind, rarely are gold and silver threads used, instead coloured wires have been innovatively incorporated along with beads, sequins and crystals. Zardosi has retained its rich and regal air and is a must have in every bridal trousseau. The land of Bengal not only has one of the sweetest languages in the world, some of the most beautiful doe-eyed women, some of the most mouthwatering cuisine but also the exquisite embroidery art of Kantha. This art has rather humble beginnings, as women would use a simple running stitch create designs, drawing thread for the same from old cloth. A rich tapestry of scenes, motifs and designs is created using just a running stitch, but the results are mesmerizing.
These amazing forms of Indian embroidery art can be found on the garments at Mirraw. Whether sarees, anarkalis or kurtas, the intricate designs hand crafted in coloured threads and ornate silver and gold ‘zari’ make a style statement that pledges the continuity of a heritage. Mirraw upholds and perpetuates the ethnic and art traditions of India.